Dr. Daniel Pérez, an investigator with the Center for Research on Influenza Pathogenesis (CRIP), recently joined the University of Georgia, College of Veterinary Medicine. The CEIRS website staff took this opportunity to talk with Dr. Pérez about his research. 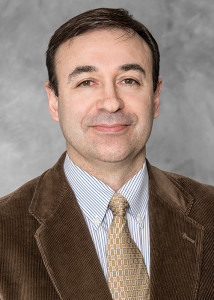 Based in Athens, Georgia, Dr. Pérez studies how influenza viruses evolve to cross the species barrier and spread to new hosts; he continues to be a part of the CRIP CEIRS Center. As he explained, transmission of a virus to a new host requires overcoming barriers to entry, replication, and release from the host cell. His lab focuses on understanding how “influenza strains behave in different animal hosts.” He studies pathogenicity and immune response to the virus in new hosts, and uses a range of animal models in his studies, including ferrets, birds, swine, guinea pigs, and mice to study interspecies transmission. Understanding how influenza virus is transmitted between different hosts can help to better assess and inform the risk of human to human transmission of emerging influenza viruses with pandemic potential.

In addition to tackling interspecies transmission, Dr. Pérez is keen to understand the current landscape of influenza viruses in wild birds and pigs. To do this, he focuses on collecting avian and swine surveillance samples from two countries, Argentina and Guatemala. “We do not know enough about influenza in the field,” stressed Pérez. However, with the advent of new sequencing techniques, Pérez is now able to generate detailed sequence data from surveillance samples and uses these results as a springboard to delve deeper into influenza biology. Next Generation Sequencing (NGS) technologies, for instance, can reveal whether multiple flu strains are present in a host; called a mixed infection. Mixed infections can lead to reassortment, which is the rearrangement of viral gene segments, and is an important mechanism for influenza virus evolution. As Pérez explained, “Using NGS, we are finding unique sequences for internal gene segments, but we don’t know if these are true mixed virus populations or even how stable this population is.” NGS, a high-throughput sequencing technology, differs from traditional Sanger sequencing by sequencing many fragments in parallel, as opposed to one fragment at a time. As a result, NGS is faster, cheaper, and can produce large amounts of sequence data. While different NGS technologies use slightly different methods, they all allow investigators to easily produce sequence data that can inform a variety of disciplines. Pérez wants to use his sequencing findings to “reverse engineer viruses with two [genetic] backgrounds” to determine “how well [the reverse engineered influenza viruses] replicate in animals or in cell culture.” Pérez hopes that conducting surveillance in the field, isolating influenza virus from surveillance samples, and studying them in new hosts will lead to a better understanding of how these viruses adapt to new hosts.

When asked what some of the most difficult problems are in the influenza field, Pérez said that although vaccines to prevent influenza are available, “We don’t really know how well [vaccines] work or why [the vaccine] did not work.” Pérez pointed out that systems vaccinology appears to be a promising approach. This computationally intensive approach marries systems biology and vaccinology. Here, “high throughput technologies, like NGS or microarrays” are used to examine immune responses to a vaccine to identify “molecular signatures” (such as gene expression patterns) associated with a good antibody response. Characterizing these “molecular signatures” will help to define how humans respond to vaccines. “This is an area that needs to be investigated further,” observed Pérez. Ultimately, these data could be used to predict how the human immune system will respond to a vaccine, including possible changes that may enhance vaccine efficacy.

Additionally, stressing that “Influenza will invariably change once we think we have a handle on it,” Pérez asserted that we need to study alternate approaches to containing influenza. “Right now, swine and avian influenza are the likely sources for the next pandemic flu; there is nothing to control these viruses, except vaccination and biosecurity measures, which tend to be expensive.” He speculated that alternate approaches do not necessarily have to be drugs; they could be feed additives, such as probiotics, that enhance the immune response of domestic animals. While an interesting approach, he was quick to acknowledge that “we are a long way from understanding how these feed additives work or how they affect the immune system.”

Dr. Pérez was first introduced to influenza while working in a hospital clinical lab in Argentina, completing requirements for his undergraduate degree. “What I knew about flu then is that people get flu; I really learned about influenza biology when I came to the University of Nebraska,” said Pérez. As a graduate student, Pérez’s mentor, Dr. Ruben Donis, gave him the option of studying bovine viral diarrhea or influenza. “To me, the only thing that rang a bell was influenza; I knew nothing about cows,” joked Pérez. After spending four years as a postdoctoral fellow at the University of Nebraska, Pérez moved to St. Jude Children’s Hospital as a junior faculty member. With support from his mentor, Dr. Robert Webster, Pérez began to tease out the molecular requirements for interspecies transmission. One of his important contributions to the field has been to show that avian influenza viruses can adapt to transmit by air in mammalian models.

When asked what advice he would give himself as a young researcher, Dr. Pérez was quick to say, “Don’t take on so many risky projects!” But he immediately countered, saying that he does not regret any of his ambitious decisions, “Some things worked out well, some things did not.” It was clear that as a mentor, he tries to maintain a balance between challenging his students’ imaginations, while motivating and providing the space to become a successful scientist.

Dr. Pérez’ advice for young researchers, passed on from his mentor, Dr. Robert Webster, is to “always remember the big picture.” Pérez credits Dr. Webster with teaching him to consider a “panoramic view,” and, in turn, encourages his students to “know the science and to consider the details, but to continually look at the big picture.”