This edition of the Behind the Bench (BTB) column is written by Chris Bandoro, a graduate student, and Dr. Nichola Hill, a postdoctoral fellow, in Dr. Jonathan Runstadler’s laboratory at the Massachusetts Institute of Technology (MIT) where they study the ecology of avian influenza viruses. Chris and Nichola attended the 2nd Annual CEIRS Surveillance Meeting and provided highlights from the conference. The BTB series publishes articles written by CEIRS Network graduate students and postdoctoral fellows sharing their perspective on influenza-related news, scientific accomplishments, and other issues of interest to the influenza community.

Over fifty researchers from the Centers of Excellence for Influenza Research and Surveillance (CEIRS), gathered from October 18th to the 20th at the Broad Institute of Harvard and MIT in Cambridge, MA for the 2nd Annual CEIRS Surveillance Meeting. The meeting was hosted by Dr. Jonathan Runstadler, a member of the Center for Research on Influenza Pathogenesis (CRIP), from MIT. Objectives of the meeting included updates from each Center on current influenza surveillance, networking focused on strengthening cross-center collaborations, and working group meetings geared towards establishing plans for future surveillance activities. While the meeting covered a diversity of topics, two interesting conversations centered on developing a surveillance map and the importance of pipelines for sample collection and analysis in the CEIRS community.

Surveillance Maps
Many network members stressed the need for an interactive map to display CEIRS surveillance activities with the goal of evaluating whether current sampling efforts are adequate for characterizing the spread of influenza globally. In response to this need, a preliminary map was created during the meeting by Dr. Nichola Hill using data from the CEIRS Data Processing and Coordinating Center. The diversity and magnitude, both in terms of species sampled and locations around the globe, of current surveillance sites from the CEIRS groups are depicted on the map. Swine and novel hosts, such as marine mammals, account for an increasing number of samples collected compared to past years – an important step towards addressing how and why avian-origin viruses adapt to mammalian hosts. Strongholds for domestic poultry surveillance include outbreak-prone countries such as China, Bangladesh, Egypt and the Netherlands. Wild bird surveillance is being conducted across North and South America in an effort to understand continental-scale viral flow and how different ecological and agricultural systems influence influenza dynamics in wild birds. Notable gaps in geographic coverage include Russia, Africa and the Middle East owing to lack of in-country capacity or logistical difficulties, such as remoteness of field sites. Conducting long-term, multi-host surveillance in the U.S. with targeted surveillance at international sites emerged as an important objective at the meeting. 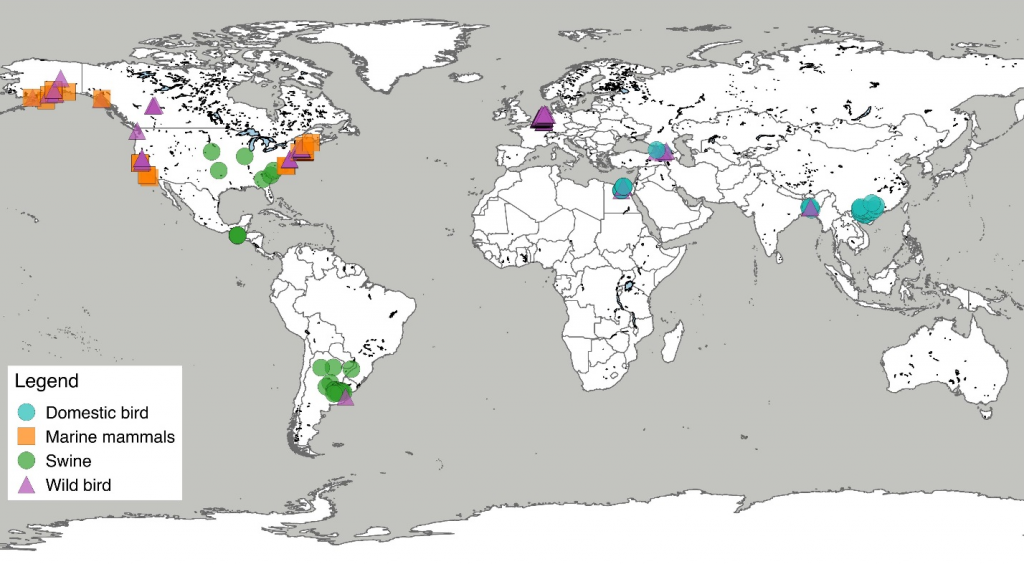 This map illustrates the breadth of CEIRS sample collection and depicts the locations and species targeted by CEIRS influenza surveillance activities.

Surveillance Pipelines
A common thread in the meeting discussion was the importance of surveillance and analysis pipelines. Pipelines in the scientific community often refer to workflows. For the CEIRS surveillance community, pipelines dedicated to processing surveillance samples are essential for harmonizing data across various groups’ distinct processes, minimizing the turnaround time to results, and clarifying the roles of each Center in the event of an influenza outbreak or pandemic. Human, wild bird and sequencing pipelines were discussed:

Overall, the meeting served as a successful platform for CEIRS members to share their research and accelerate new ideas for future surveillance efforts around the globe. Participants are looking forward to re-evaluating the surveillance maps and pipelines at the 3rd CEIRS Surveillance Meeting which will be held in 2016.