The immune system is essential for defending our bodies against invading microbes. However, the magnitude of its response to infection must be tightly controlled. An overactive response can cause more harm than good by damaging cells and tissues, worsening disease, even leading to death. Here, Alex Rialdi and Laura Campisi, with colleagues from the Center for Research on Influenza Pathogenesis (CRIP), part of the Centers of Excellence for Influenza Research and Surveillance (CEIRS), investigated ways to dampen lethal inflammation during infection to protect the body from harm.

Investigator Input | “These experiments highlight the therapeutic potential of Topoisomerase 1 inhibitors for the treatment of sepsis and diseases characterized by lethal inflammation, which are responsible of approximately 10 million deaths per year.” Adolfo García-Sastre, PhD (CRIP)

Rialdi and Campisi focused on gene regulation when the production of inflammatory proteins, like cytokines and interferons, is first ramped up. This early response involves a series of signals that enable the expression of inflammatory response genes, in part by increasing the accessibility of those genes to factors that drive their production. 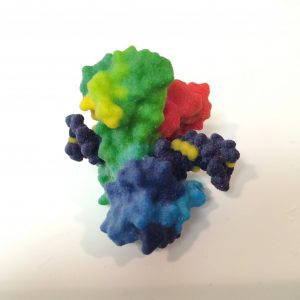 DNA is maintained as a tightly wound and highly packed structure called chromatin. Upon infection, regions of DNA are loosened, or remodeled, so that cellular machinery can access and express genes needed to fight off infection. However, unwinding DNA in one location increases physical stress and impairs expression of genes in other locations, so the topoisomerase family of proteins actively work to relieve this stress throughout the chromatin structure. The Top1 protein nicks and repairs DNA to remove physical stress, preventing further damage and promoting normal cellular gene expression.
NIH Image Gallery, 3D DNA Topoisomerase

In this publication, the authors used a panel of drugs that alter chromatin remodeling and measured interferon-beta production after infection with different viruses or bacteria, including a laboratory strain of H1N1 influenza virus. Their initial screen identified Camptothecin, an inhibitor of topoisomerase 1 (Top1), as a potential therapeutic which decreased the production of interferon-beta. By examining global cellular gene expression, the authors found that inhibiting Top1 reduced synthesis of many potentially damaging cytokines and interferons following infection, with limited effects on the expression of other host genes.

Unlike some of the other targets examined, the Top1 protein has not been previously implicated as a mediator of immune responses, making it a new target for drugs against severe influenza. Mice infected with H1N1 influenza and Staphylococcus aureus, an opportunistically deadly bacterium, survived when treated with the Top1 inhibitor, confirming its protective potential. Rialdi and Campisi et al. unraveled a novel mechanism of gene regulation and uncovered a potential therapeutic against lethal inflammatory responses following viral and bacterial infections.

Links to other commentaries: