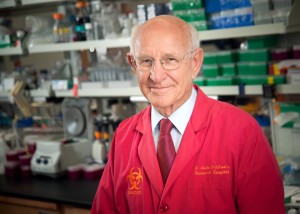 I was honored to attend the retirement celebrations for the renowned influenza virologist Dr. Robert G. Webster, at St. Jude Children’s Research Hospital in Memphis, TN. Rob has been a force in influenza research since the 1960s, first in Australia and, for the last 46 years, at St. Jude. His retirement on January 31st, 2015 brought together former trainees and collaborators from Hong Kong, Scotland, Australia, Japan, and all over the United States.

On Sunday, January 25th, the St. Jude Department of Infectious Diseases hosted some 200 guests at a dinner at the Brooks Museum of Art. The Master of Ceremonies was Nobel laureate Dr. Peter Doherty. Dinner guests shared many fond memories of their time working with Rob, including stories of the warm welcome Rob and his wife Marjorie gave to visiting scientists and tales of enjoying the bounty of his multi-acre “garden” outside of Memphis.

The formal symposium on Monday, January 26th highlighted Rob’s impressive career. Symposium speakers were introduced by St. Jude President and CEO, Dr. James R. Downing, and Chair of Infectious Diseases, Dr. Elaine Tuomanen. Dr. Downing pointed out that 20 of Rob’s more than 700 publications appeared in 2014, so there is no sign he is slowing down. Highlights from the symposium included:

Dr. Linda Lambert, chief of the Respiratory Diseases Branch at NIAID, walked us through the long history of Rob’s NIH support for avian influenza surveillance in order to identify potential human pandemic events; his efforts were critical to the establishment of the Centers of Excellence for Influenza Research and Surveillance (CEIRS) Network.

Dr. Virginia Hinshaw, chancellor emeritus of the University of Hawaii, Manoa, joined Rob’s lab in the 1970s and was the leader of much of the avian surveillance work. She and Rob regularly swabbed ducks brought in by hunters to a plant in West Memphis, Ark., for plucking. But, she said, they were never allowed to touch the famous parading ducks at the Peabody Hotel in Memphis.

Dr. Yi Guan was one of the original team that Rob set up in Hong Kong to survey avian influenza. He is now Director of the State Key Laboratory of Emerging Infectious Diseases. Yi said Rob could pick out an infected goose in a flock even though the H5N1 virus was asymptomatic in geese. He had amazing instincts based on many years of experience. Together, they identified goose/Guangdong as the predecessor of the virulent H5N1.

Dr. Jackie Katz is currently acting deputy director of the Influenza Branch at CDC. She came to St. Jude as a postdoc and her research project was host cell selection. Jackie moved to the CDC in 1992, and she said that when the H5N1 virus appeared in 1997, they had no reagents; however, Rob immediately made all of his reagents available to her.

Dr. Yoshihiro (Yoshi) Kawaoka, winner of the 2014 Popular Mechanics Breakthrough Award, spoke on his work as a postdoc at St. Jude and long-standing collaboration with Rob. Yoshi’s initial project was to search for influenza sequences in duck genomes, but the advent of H5N2 avian influenza in Pennsylvania led him to discover the mutations that had turned an innocuous virus into a highly pathogenic one. Yoshi and Rob share a remarkable 65 publications, including the beginning of reverse genetic systems for influenza that allowed for the construction of an H5N1 virus strain that was attenuated and allowed vaccine to be grown.

Dr. Richard Webby, director of the WHO lab at St. Jude, followed. Like Rob, he is from New Zealand; however, they are not related, as many people think based on the similarity of their names. Richard and Rob worked on swine influenza; showing that reassortant viruses sometimes transmitted better than either parent and uncovering a high prevalence of swine influenza in domestic and farmed pigs. In his talk, Richard cited some of Rob’s more enthusiastic quotes in the press: “H1N1 is a nasty bastard” (NPR) and “Half the population may die” (ABC News).

The final speaker was Dr. Rob Webster himself. He paid tribute to Dr. Allan Granoff, the senior virologist when he arrived at St. Jude, for his outstanding mentorship. It was Allan who developed the model for a successful grant application that is still recognizable as a “St. Jude grant.” Rob’s example of Allan’s instruction was, “Write it so your grandmother understands it.” Rob also paid tribute to the leaders of St. Jude for their unswerving support of influenza work and for their dedication to curing cancer in children. In typical fashion, Rob ended with a plea for the importance of continued research, particularly the gain-of-function experiments that may lead to better understanding of the principles of virulence.