The DPCC Communications team interviewed Stephan Bour, PhD, Project Director of the Data Processing and Coordinating Center (DPCC) for the Centers of Excellence for Influenza Research and Surveillance (CEIRS) and Executive Director of Clinical Informatics at Digital Infuzion.

Communication in code and insights in information

The emergence of the bioinformatics field and its progress since have emphasized the need for integrating, analyzing, and sharing complex data sets. Dr. Stephan Bour’s work focuses on enabling scientific data analysis by developing standards, harmonizing data, and developing a semantic understanding of the relationships that exist between data elements. One of the biggest challenges faced by the scientific community, regardless of discipline, is accessing and interpreting a vast amount of available information. Scientists are currently hindered in their ability to broadly apply existing data to unanswered questions that could drive the next major scientific breakthrough because data remains dispersed and disconnected. This challenge represents a central driving force for Dr. Bour’s work—helping people access knowledge and resources to tackle the complex problems humanity faces. Influenza is one such complex global problem.

A vision for the DPCC 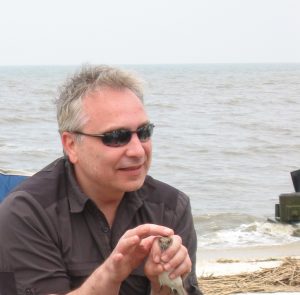 Image of Dr. Bour on a recent sampling trip to Delaware Bay, New Jersey to contribute to CEIRS avian surveillance efforts. He described the impressive dedication of volunteers and engagement of the community.

CEIRS is an integrated Network of international, multidisciplinary teams performing research and surveillance on epidemic and pandemic influenza viruses. With this highly distributed and diverse Network of investigators, the DPCC was created to support CEIRS by enabling data tracking, sharing, and collaboration. The infrastructure managed by the DPCC aims to increase accessibility to surveillance and experimental data, publications, and reagents generated by CEIRS within the Network and for the broad scientific community. Dr. Bour believes that the data hosted at the DPCC will eventually be used as a resource for analytics and in-silico research. This captures his philosophy on enabling efficient information sharing, paving the way for novel scientific advances. There is a considerable wealth of information and expertise in CEIRS against some of the most important challenges related to influenza, public health, and medicine. He hopes that the DPCC will act as the nexus of CEIRS data to find patterns that may “spur novel ideas, hypothesis, and connections” for investigators.

The DPCC also serves as an integrated source for resources and communication. One of the principles of the Network is to support a collaborative research community that spans many institutions and sectors. Recently the DPCC released the Integrated Collaboration and Communication (ICC) Platform exclusively to members of the CEIRS Network. Accessible through the existing DPCC Portal, this tool shares news on CEIRS activities, supports protected sharing of documents and provides dedicated online workspaces for teams. Because the DPCC is taking care of the technical management of the platform, users can focus on “making collaboration frictionless, making new connections with their peers, and streamlining large tasks, such as the preparation of their Annual Reports to NIAID.” It is not just another place for data and documents, but rather an ecosystem for collaborating, discussing, organizing, and connecting with other members of CEIRS. The DPCC is developing a comprehensive outreach plan that will ensure the ICC evolves in response to the community’s needs.

From the (virologist’s) bench to bioinformatics

As the Project Director of the DPCC, Dr. Bour manages a diverse team dedicated to supporting the research and surveillance efforts of the CEIRS Network. However, he started his career behind the bench. Dr. Bour joined the budding field of HIV research just after the discovery of CD4 as the protein HIV uses to invade human T-cells. He continued his work with leading experts: Malcolm Martin and Tony Fauci at the National Institutes of Health, contributing to early breakthroughs and characterization of the virus. This time was spent studying an organism he finds both fascinating and terribly beautiful. Dr. Bour reflected that if you consider viruses from an evolutionary and scientific standpoint, “they are marvels of engineering.” The genome of HIV is so efficiently composed, with genes overlapping others and read in different directions. Translating biology to technology, he mused about applying this to data storage, keeping multiple pieces of data as efficiently as viruses package their genetic code. “It is hard to imagine having found another infectious disease in another time in [my] life that could have been more instructive and exciting,” said Bour. “It is fascinating to think a 9kb organism is challenging humanity to the limit of its knowledge and power.”

The sequencing of the human genome was an instrumental advance driving him towards bioinformatics and computational biology. Access to the human genetic code provided a novel and immensely rich source of data for defining the interplay and interaction between virus and host. To use this data, it was essential to understand the available tools. What started as setting up local databases and servers for his research team evolved to bioinformatics analysis and training. Pursuing these interests, Dr. Bour championed and led the first National Institute of Allergy and Infectious Disease (NIAID) bioinformatics core facility and spent several years as the Chief Information Officer of the National Heart, Lung, and Blood Institute managing complex biomedical information technology programs. Now at Digital Infuzion as the Clinical Executive Director and the Project Director of the DPCC, he continues to work in informatics, aligning science with technology.

Next up for the DPCC

The DPCC continues to evolve with the mission of supporting and advancing the research and surveillance efforts of the Network. Dr. Bour envisions next-gen analytics on the horizon as an essential resource to CEIRS investigators. Leveraging technology to interpret CEIRS data and communicate results would be an instrumental advance. With an increasing amount of CEIRS-generated data, the Network needs analytics platforms that can integrate and interpret complex data sets to reveal patterns. To get there, we need to define the structure and relationships of CEIRS-generated data to be interoperable, making relevant information and key insights accessible for quick analyses. By making the data speak and supporting collaboration across the Network, the DPCC hopes to enable the investigator-driven advances needed to combat the ever-present threat of influenza.

Dr. Bour’s advice for those early and late in their careers is “to never hesitate to change [careers]. That’s it.” Following the pursuit of knowledge, his path forayed into newly ignited fields. In other words, be open and attentive to all opportunities.