The DPCC Communications team interviewed David Topham, PhD, co-Principal Investigator (co-PI) of the New York Influenza Center of Excellence (NYICE) and Professor in the Department of Microbiology and Immunology at the University of Rochester. As co-PI of NYICE, Dr. Topham collaborates extensively across NYICE and the CEIRS Network at large. 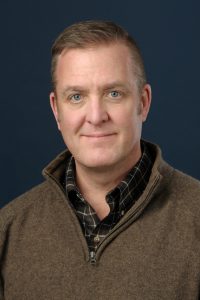 Dr. Topham’s research program includes a diverse set of projects that pair laboratory-based research with human studies and complex computational analysis. A “mouse immunologist” by training, his career involves the study of many of the diverse traits of the immune system. He considers his lab “truly translational,” moving observations from human studies into mice and other model systems to tease apart what drives immune protection against influenza and how it might be bolstered with improved vaccine formulations or delivery. His current work explores the relationship between an individual’s immune responses and the human influenza viruses that circulate the globe each year. People display an incredible amount of variability in their susceptibility and immune responses to influenza. Dr. Topham’s research to understand why such differences occur in individuals, as well as why and how circulating viruses diverge from their counterparts, could inform the design of better vaccines.

Culturing a crystal ball for influenza

The first line of research discussed by Dr. Topham addresses existing gaps for influenza vaccines and exemplifies the virtues of his team’s translational approach. One challenge for protecting hosts from influenza is that the virus evolves in response to attacks from the immune system to avoid being recognized as it spreads—a process called antigenic drift. If changes to viral proteins resulting from antigenic drift could be reliably predicted, scientists could improve vaccines by designing them to account for these anticipated mutations. Dr. Marta Lopez de Diego, a research Assistant Professor in the Topham lab, designed a research project to explore antigenic drift to see if mutations can be predicted. She grew H3N2 seasonal influenza vaccine strains in cells in the presence of serum from people who were vaccinated or naturally infected with the flu from the same year. Antibodies in the human serum inactivate the virus mimicking, on a simplified scale, what occurs during an actual infection in someone previously exposed to or vaccinated against a similar influenza strain. In little time, the viruses accumulated mutations allowing them to avoid inactivation by the antibodies. Most importantly, the viruses nurtured in the lab replicated what had been observed in nature. The locations of the changes from the lab experiment were nearly identical to the changes observed in viruses that spread through humans during previous flu seasons. Of course, more work is needed to further explore these findings. Such an approach may help predict virus evolution to aid vaccine manufacturers in improving vaccines. Experts may also use this type of information to inform the composition of the annual flu vaccine. “We look at this as one additional piece of information for people who choose the vaccine strains to inform selection. It might add one additional facet to the decision making,” said Topham.

Understanding the details of host immunity to influenza also informs the development of more broadly protective vaccines. Ideally, influenza vaccines would stimulate an immune response that protects from season to season and against the many types of animal influenza viruses that pose a threat. Dr. Topham shared some exciting work that was spurred on by a detail overlooked in the literature. Vaccines against pandemic influenza viruses have been largely unsuccessful. The Topham lab found that if you vaccinate mice with an experimental avian pandemic vaccine, then provide a booster with a second virus that differs just enough, you generate a lasting immune response that protects from both viruses. The research underpinning this finding used simulation of B cell responses, a type of white blood cell, using computer modeling and validation in animal models to identify corresponding vaccines that differ just enough to improve host protection.

So, what’s contributing to the cross-protection? Dr. Topham suggests “there is something about immunizing against a similar but not identical strain that leads to a broader, more cross-reactive immune response.” The selection of strains used in both rounds of vaccination is critical. The highly variable region of the HA protein, which experiences antigenic drift over time and makes vaccines ineffective, plays a dominant role in promoting the antibody response to influenza. Like ‘Where’s Waldo,’ it’s a challenge for your immune system to focus on shared or conserved properties between viruses with other information dominating the view. Topham’s approach is novel in that it uses viruses that have distinguishable differences in the dominant immune-activating regions of the viral surface proteins but highly similar features in regions that are conserved over time.

Dr. Topham shared his perspectives on the long-sought universal flu vaccine. “There are many ways in which we can achieve more broadly cross-reactive immunity.” Much of the work on universal influenza vaccines has centered on the conserved stalk region of the HA viral surface protein. What is less defined is the impact on the HA protein when you apply strong immune pressure against that region in human populations. “What we think, and we know historically, is that we’ll see mutations in the virus to avoid immunity,” said Topham. However, less is known on the speed at which those mutations occur and their cost on the virus’ ability to spread in humans. Topham hinted at new work suggesting that not all mutations in this region debilitate the virus, contrary to the dogma, allowing resistant variants to arise. What does this mean? “Stalk-based vaccines will achieve the goal of more broadly protective immunity, but we don’t think it’s the panacea that everyone is looking for.” While a broadly protective response will make immense strides in defending against influenza, a truly universal and impenetrable flu vaccine still seems a distant future.

There is mounting evidence that the first viruses a person is exposed to color their immune response to subsequent infections for the rest of their life, a phenomenon called priming. “The next big leap [for the influenza field] is developing right before our eyes: an understanding of how priming impacts immune responses later,” said Topham. By understanding the mechanism and impact of priming, at risk groups can be identified to develop targeted vaccine strategies. Dr. Topham’s lab is developing ways to fingerprint an individual’s immune response to influenza to design tailored vaccines. “The technology is there for personalized vaccination,” said Topham. There is still a lot to be understood. To best optimize existing vaccines or to tailor vaccines to the individual, a better understanding of the measures that predict host responses to vaccination or infection is needed. The immune system’s long-term memory in humans is very different from mice, so laboratories must get creative and look to other model systems to assess more complex priming histories.

A NYICE view of influenza research

As co-PI of NYICE, Dr. Topham shared some insights into their role as part of CEIRS. From the start of the Center, NYICE had a primary focus on understanding human influenza viruses with multidisciplinary, multi-institutional basic and clinical research. In particular, their Center provides expertise in experimental influenza vaccines and immunology.

The NYICE investigators are working collaboratively with different perspectives, techniques, and approaches. “You’ll see that start to come together more and more,” said Topham. For example, a collaboration between four NYICE labs generated a novel chip array of monoclonal antibodies to serotype viruses for cross-Center pandemic preparedness efforts by CEIRS. This new tool captures a wide selection of antibodies targeted to specific pieces of the flu virus on a solid surface. Researchers can test in batch how similar a particular virus’ surface proteins are to other strains of influenza. Topham described this as “the first-ever alternative to ferret antisera for antigenic typing of influenza viruses.” Dr. Luis Martinez-Sobrido’s lab generated the viruses. Dr. Patrick Wilson’s lab isolated and prepared the antibodies. Dr. Ben Miller’s lab developed the chip technology. This was the fruit of a strong collaboration among many investigators, including the Topham lab. 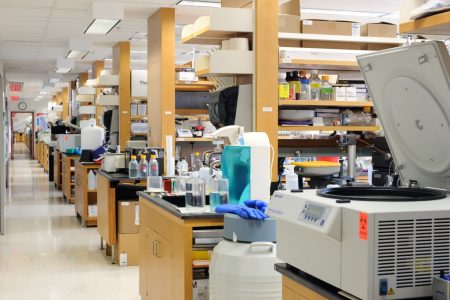 View from the Topham lab at the University of Rochester

Career advice on shifting science in a data rich setting

The DPCC team asked Dr. Topham to share some career advice for trainees. His top two pieces of advice were admittedly “easy to say and hard to do.” First, at any stage in a career be as productive as possible. The currency of science is publications, so that means concentrate on getting work into publishable units. Second, find something you love doing. Most people who do things they love succeed.

A final word of advice from Dr. Topham centered on a shift in the way research is conducted. “There is a greater emphasis on dealing with large data sets,” said Topham. The technology available now generates far more data, outpacing the tools and expertise available for analysis. “We now need even newer tools to analyze data because there isn’t anything on the shelf,” said Topham. The scientists that succeed today have the skills to both conduct traditionally wet bench laboratory research and to perform sophisticated computational analysis. The translators, or “those who can understand and translate both the biology and the analytics are incredibly powerful,” said Topham. Taking a multidisciplinary approach, which for his lab includes modeling immunity and leveraging computational approaches for high-dimensional flow cytometry and sequencing, is necessary. “Being able to speak the biology and talk analytical approaches, statistics, and modeling—that’s the scientist of the future.” You have to be able to work at the interface and be fluent in both languages.

Training with the Titans and branching out

As a postdoctoral fellow at St. Jude, Dr. Topham trained with the Titans of the influenza field. In Dr. Peter Doherty’s lab, he became a viral immunologist by trade and experienced much of the excitement following the award of the Nobel prize to Doherty in 1996. From early morning calls and celebrations, the experience was exciting but challenging.

What makes for a successful career? As part of a recent seminar series, Dr. Topham was asked to reflect on the influential tipping points of his career path as it branched or veered to new directions. Each significant branch point was “serendipitous.” Reflecting on his graduate and postdoctoral career, influenza research was not popular at that time. It was used as a mechanism to tweak the immune system and understand it’s function, rather than to understand the virus itself. For the fledgling field, the influenza scientists were well-positioned to respond to new emphasis placed on influenza research by the NIH. The CEIRS trainees today are the next generation. Dr. Topham advised, “keep your eyes out and recognize when you have an opportunity. Don’t shy away from it.”