A global team of researchers, including investigators part of the St. Jude Center of Excellence for Influenza Research and Surveillance (SJCEIRS), show in a new study that ferrets are susceptible to the SARS-CoV-2 virus, and that infected ferrets are able to transmit the virus to other animals through both direct and indirect contact (Kim 2020). The study, published in Cell Host & Microbe by Young-Il Kim, et al., describes an important new tool in the fight against the global COVID-19 pandemic.

Ferrets have long been used for the study and prevention of respiratory diseases as many important aspects of human physiology, disease symptoms, and disease transmission are mirrored in this animal model. They are often considered the gold standard for the study of influenza viruses. One important factor is the ability of ferrets to transmit respiratory diseases. This critical feature allows investigators to examine the transmissibility and infectivity of respiratory pathogens and test medical countermeasures such as vaccines that can reduce or eliminate infection in naïve animals. 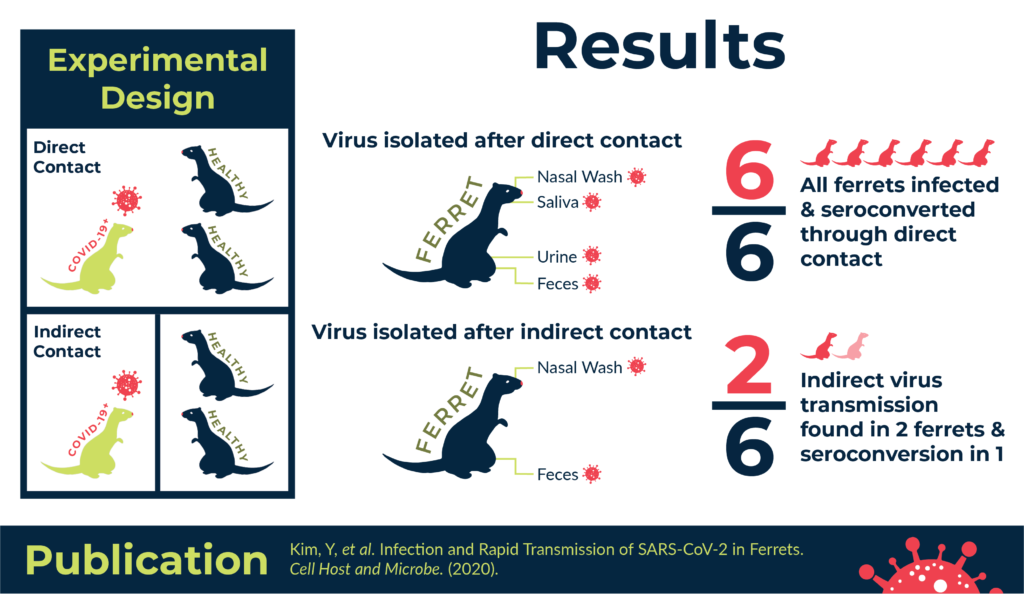 Authors found that SARS-CoV-2 transmitted to all ferrets in the direct transmission model but only a third of ferrets not in direct contact with infected animals.

Here, Kim et al. set up a series of experiments to test different SARS-CoV-2 transmission methods using a ferret model. They tested direct transmission by placing infected and uninfected, or naïve, animals in the same cage. They tested indirect, or airborne transmission, by placing infected ferrets in cages next to healthy ferrets. Additionally, they tested transmission by exposing healthy ferrets to feces and urine from infected ferrets, as fecal transmission has been an open question in the healthcare community. Throughout their experiments, they collected data on the symptoms of both the infected and exposed ferrets. Additionally, they collected blood, nasal cavity, saliva, urine, and fecal samples to test the amount of virus in different parts of the ferret.

The research team found that healthy ferrets were highly susceptible to SARS-CoV-2 infection through direct contact. Indeed, the results suggested that many ferrets exposed via direct contact became infected before the initially infected animals reached their peak viral load or most severe symptoms. The study also demonstrated that indirect transmission of SARS-CoV-2 was possible, but was much less robust than direct transmission. Transmission occurred in only 2/6 experimental animals exposed through indirect transmission; in these animals, the virus was only detected in nasal and fecal samples, and only one of these animals developed antibodies to the virus. Fecal transmission was found to be highly efficient as well; however, it should be noted, these experiments involved direct application of a fecal sample wash, as their purpose was primarily to test the infectivity of the fecal sample itself.

Together, Kim et al. presented a new ferret model for SARS-CoV-2, which will be an important tool for clarifying open questions about the virus and the disease it causes. Further, the ferret model will be another important CEIRS Network-supported tool that can help in the development of critically needed drugs and vaccines to fight the global COVID-19 pandemic.