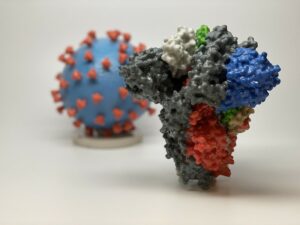 The CEIRS-generated reagents provided by Dr. Krammer included portions of the spike glycoprotein of SARS-CoV-2. A 3D printed version of the complete spike protein is shown above, with the a model of the whole virus in the background. Credit: NIH

The CEIRS Network’s response to the COVID-19 pandemic includes generation of resources, reagents, and information for both other members of CEIRS as well as the broader scientific community. Recently, reagents developed by Dr. Florian Krammer at the Icahn School of Medicine at Mount Sinai, part of the Center for Research on Influenza Pathogenesis (CRIP), were used to support a research study investigating the seroprevalence of SARS-CoV-2 antibodies in healthcare workers in a hospital in Spain. In brief, Garcia-Basteiro et al., from the Universitat de Barcelona in Barcelona, Spain, found that while there was a relatively low seroprevalence of antibodies in healthcare workers during the peak of the outbreak in Spain, many who tested positive had not been diagnosed with COVID-19, suggesting that more frequent testing of healthcare workers should be implemented. The study can be read in full in Nature Communications.